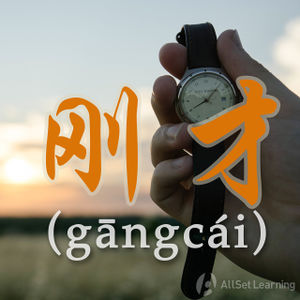 In order to say that something "just now" occurred, use the time noun 刚才 (gāngcái). It can be placed in front of the verb or the subject of a statement.

This grammar structure is pretty straightforward. Similar to the English "just now," you can put 刚才 (gāngcái) right before the verb in a sentence. It can also come before or after the subject.