Difference between revisions of "Using "er" to explain contrasting ideas" 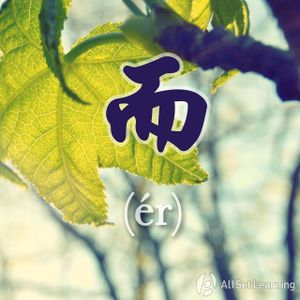 The conjunction 而 (ér) is used to connect two sentences that are related to each other, and is also frequently used to emphasize contrast between two parts of the sentence. In this manner, it can be seen as a word meaning "but rather." 而 is often used in a more formal or literary sense, but is also common in everyday speech.

Frequently you'll see the pattern in one of these two more specific forms involving the verb 是:

Strictly speaking, the 而 isn't required in either of these patterns, but it makes the contrast super clear.

As you can see, 而 comes between the two to stress the contrast.