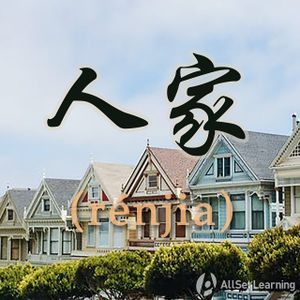 When referring to other people, we can use both the words 人家 (rénjia) and 别人 (biérén). But 人家 has additional grammatical uses which we will explore in this article.

Both can mean "others"

人家 and 别人 both refer to others besides the speaker and the listener. However, 人家 is more colloquial.

For these additional uses of 人家, it would be incorrect to use 别人.

人家 can be used to refer to yourself, and it is often used this way by women, giving it a sort of girly, shy, tender feeling.

人家 can also refer to someone previously referred to (in the context of the conversation or body of text) or it can refer to a certain someone that both the speaker and listener know.

人家 can also refer to households. In this case, it's pronounced as "rénjiā" rather than "rénjia." This use is going to be the least common in everyday spoken Chinese.