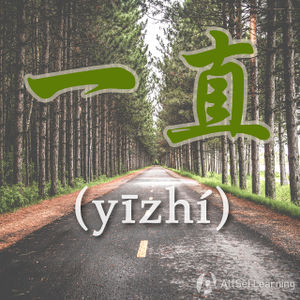 Both 一直 (yīzhí) and 一向 (yīxiàng) mean something close to "all along," and deal with continuous actions. However, their uses are subtly different, and they are a pair of words that are often confused (and tested on!).

一直 means "straight" or "constantly" and it has the sense of doing something continuously "since a certain time." This means that something may have occurred, and then 一直 can be used with the action or habit since that point. It's important to note that this point in time doesn't necessarily have to be in the past, so 一直 can be used to say something "will happen repeatedly" in the future.

一向 does not have a starting point in time specified like 一直 does. Instead, it means that things have always been like they are. In this way, it is more like a habit. Furthermore, it is often used to express a habit or event that you don't like, and can also be used in conjunction with 不.

However, 一向 also can’t affect words that indicate some change (as this wouldn’t be a habit), nor can it talk about constant future actions. For both of these cases, 一直 should be used instead.