Comparing "zai" and "you" 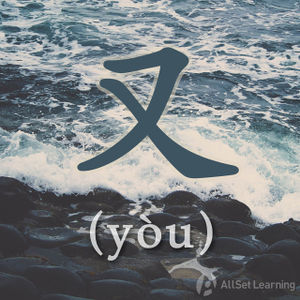 Both 再 (zài) and 又 (yòu) express the repeating of an action and can be roughly translated in English to "again." However, 再 is used to express actions that have not yet occurred (the "future again") and 又 is used for actions that have already occurred (the "past again"). They're not interchangeable. In addition, each word has some additional special usages.

再 is used to express something that has already happened and will happen again.

You need to use 再 for this usage; you can't use 又:

再 can be used to say "another"

Aside from expressing the repetition of an action, 再 can also be used to express the equivalent of the English word "another."

Note that the "Object" mentioned above is usually also going to have an 一 and a measure word in front of it. You'll see that in the examples below.

再 can be used to say "and then"

再 can be used with 先 to express sequential order. (ex. Do this....and then this....) In some cases, 再 can appear by itself to simply mean "and then." While this doesn't sound so easy to confuse with 又, it's actually quite common for intermediate learners to misunderstand this use of 再 as meaning "again," so it's definitely worth mentioning here.

又 is used in declarative sentences and describes the simple repetition of actions. This repeated action has already occurred once in the past.

又 adds emotional coloring to events recurring in the future

又 is sometimes used to express that something that has happened before is going to happen in the immediate future. In this case, it usually appears with 要 (yào), 可以 (kěyǐ), 能 (néng), or 是 (shì). This usage often expresses exasperation or impatience with something happening yet again, but sometimes it's more neutral, or even happy.

Both 再 and 又 have other uses as well

The comparisons above are the cases where 又 and 再 are most easily confused. This wiki also has other uses of both, however: