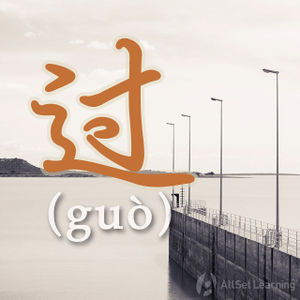 The aspect particle 过 (guo) is used to indicate that an action has been experienced in the past.

What this expresses is that the verb has been done at least once before, without specifying a particular time. 过 (guo) is used to talk about whether something has ever happened - whether it has been experienced.

In English, if you're asking a question and really trying to figure out if someone has ever done something before, we tend to use the words "ever" and "before." In Chinese, 过 (guo) alone expresses this, without the need for additional words.

Because 过 (guo) is used to talk about past actions, it should be negated with 没 (méi).

To emphasize "never" even more, you can also use the word 从来 (cónglái).

You'll sometimes see 过 (guo) used together with 了 (le). This can be a little confusing, as it doesn't seem to be following the rules laid out above. For more on this special usage of 过 (guo), see the article on using 过 (guo) with 了 (le).