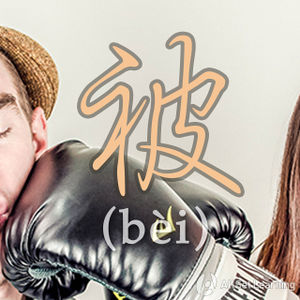 被 (bèi) sentences, which are called 被字句 (bèizìjù) in Chinese, are a key way to express the passive voice in modern Mandarin Chinese. In passive sentences, the object of an action becomes the subject of the sentence, and the "doer" of the action, which would have been the subject of the normal (active voice) sentence, becomes secondary and may or may not be mentioned in the passive sentence.

What is a 被 sentence?

For the sake of clarity, take these sentences for example:

First, passive sentences indicate that one has been negatively affected. For example:

Second, passive sentences shift emphasis from the "doer" of the action to the one affected by that action. For example:

Third, passive sentences allow one to avoid having to mention the "doer" of the action, either because it is unknown, or for other reasons. For example:

How to Use 被 Sentences

Normal use of 被 has a few preconditions:

被 sentences with a doer:

被 sentences without a doer:

You know the basic pattern already, so it's time to go deeper...

There's just one other complication. What if you want to make a sentence in the negative? To negate a 被 sentence, you need to insert 没 or 没有 (past) directly in front of 被. For the present and future, use 不.

The particles 了 and 过 can both be used with 被 constructions, while 着 cannot. 着 indicates an action is "ongoing," which is not appropriate for a 被 construction, which should refer to an already complete action.

Sorry if these example sentences all seem like downers, but 被 sentences tend to be negative (or even tragic!).

What if you want to include adverbs in your 被 sentence? Where should those go? They go in the same place as the negative adverb 没有, above.