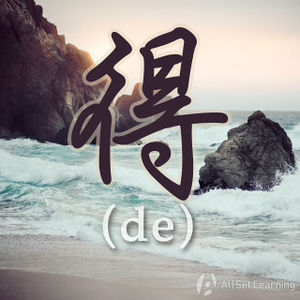 While most complements follow verbs, degree complements can follow both verbs and adjectives. These complements intensify or modify the degree of expression of the verb or adjective.

When to use it

Until now, you may have been getting by just fine modifying your verbs with adverbs. You can use 非常 to say "very" and all that. Great. But once you learn to use degree complements, a whole new layer of expressiveness is infused into your language. You will be able to express degree of verbs and adjectives with much more precision and color. But how do you know when to use the degree complement? Here are the main reasons to use it:

1. To express how a verb happened or assess its quality

2. To express to what extent (or degree) an adjective is true

We can use all kinds of degree complements to add some color to our verbs.

Just like little kids, objects and complements don't know how to share. Make sure each gets its own (identical) verb. Also make sure that the object comes after the first instance of the verb, and the complement after the second.

Approach #2: Move the Object to the Front

Note: the 你的中文 in the sentence above can also be 你中文 (without the 的). When it makes sense to include the 的, it often sounds better.

Just to be completely clear, the following sentences are both incorrect:

There are three especially common degree complements which can follow adjectives immediately and are not preceded by a 得:

Note that 死 can also act as a result complement in verb phrases such as 打死 (literally, "beat to death"). In the examples above, however, it merely indicates an extreme degree (no actual deaths involved!).

Here's how a professor of Chinese at Yale puts it[1]:

Okayyy, so it sounds like descriptions and states are all degree complements? That's one of the views on the issue.

None of these classifications truly matters though: the key is understanding them and using complements correctly to express yourself in Chinese. (This is already difficult without adding in unnecessary academic distinctions!)