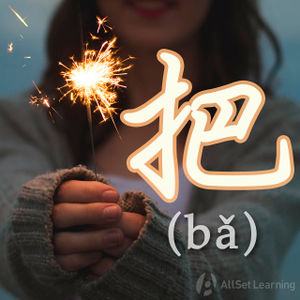 The 把 (bǎ) sentence is a useful structure for constructing longer sentences which focus on the result or influence of an action. One of its key features is that it brings the object of the verb closer to the front of the sentence and precedes it with a 把. It's really common in Mandarin but can feel a bit awkward at first for English speakers.

What is a 把 sentence?

A basic sentence in Mandarin is formed with a subject-verb-object (SVO) word order, as in English:

A 把 sentence shakes things up a bit, and you get this structure:

Note that the object has moved, and is preceded by 把. You now have SOV word order.

This is all well and good, but most students of Chinese, on learning about 把 sentences for the first time, have the same reaction: "Why the heck would I ever use this structure? The SVO word order always works just fine, right?" The answer is: well, no... not always. It's true that 把 sentences are often used to achieve somewhat subtle differences in emphasis, but there are also very good reasons to use 把 sentences when a regular sentence just won't do. Take this sentence for example:

How would you say this without the 把 construction? You might try this:

The problem is that the above Chinese sentence is not grammatical. You can't put an object right after a verb, and then put other modifiers of the verb after the object. Here are other examples of how to successfully use 把 and 放 in the same sentence.

For each of these, the sentence would be ungrammatical if you tried to do away with the 把 and put the object right after the verb.

Key Things to Keep in Mind When Using 把

The usual structure for 把 sentences, as described above, puts the object right after 把. For certain verbs, however, you can have two objects in a 把 sentence. Their use in a 把 sentence will also involve prepositions.

They use the following structure:

Because 把 sentences are all about "doing stuff" to the object, and complements in Mandarin often handle this issue, it's good to be aware of how these two grammar features interact.

Result complements work particularly well in 把 sentences. When you consider that both structures deal with the result or outcome of an action, this makes sense. The majority of result complements (except for perception verbs) fit in very well in a 把 construction. For example:

Note that potential complements do not appear in 把 sentences. This is because they are hypothetical, whereas a 把 sentence must describe what actually happens.

Since the basic structure has already been given above, we can jump right into some more exciting patterns!

To negate a 把 sentence, insert 不要 or 别 (present or future) or 没有 (past) directly in front of 把. You can't put it after 把, 'inside' the 把 construction, as this would break the rule about describing what actually happened to the object. It would be like saying "What happened to... was nothing." It doesn't sound natural.

Be careful how you form questions with 把 sentences though. Remember that you have to have a definite object, and you have to describe what was done to that object. A question form could easily get in the way of one of these conditions.

Adverbs can usually be placed before 把 or before the verb (the exception is negative adverbs, as described above). Adverbs in each of these positions can change the meaning in slightly different ways, as demonstrated with 都 in the examples below.

As mentioned above, the object of a 把 sentence must be something specific and definite. This might involve noun measure words, which will come after the 把 and before the object.

Verb measure words are frequently used in 把 sentences and come at the end of a 把 sentence.

Note that in all of these sentences, the object is something specific and definite.

Ready to Check Your Mastery of 把?

If you're pretty clear on the explanations you've read so far and the examples make sense to you, you still need to put your knowledge to the test.

Some verbs generally can't indicate what happened to the object. They only describe what the subject did. Below are some examples of verbs that do not generally work in 把 sentences.

Other Uses of 把

It's important to note that 把 is a word with other uses. The most common is as a measure word for things with handles, or things that you hold. Examples include 一把伞 ("an umbrella"), 一把枪 ("a gun"), and 一把椅子 ("a chair"). So, you've got to look at how 把 is being used in a sentence before you can understand its meaning.

To demonstrate the difference, here's a sentence with both kinds of 把: